By F. Xavier Vila, editor of our recent title Survival and Development of Language Communities

The idea for this book began with the feeling of uneasiness felt by many researchers, who frequently felt that the widespread dichotomy between majority and minority was excessively simplistic as a tool to analyse the prospects of survival for many language communities. To put it briefly, so many languages did not fit in this apparently neat dichotomy that alternative approaches had to be found and this was how the ‘medium-sized language communities’ project began. 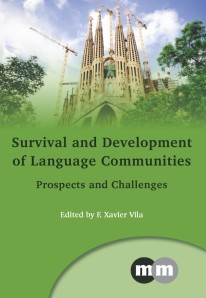 The goal of this project was in no way that of replacing a dichotomist model with another, equally simplistic, three-tier one. Rather, the goal was to improve our understanding of the sociolinguistic dynamics affecting those languages ‘inbetween’ by comparing the situation and evolution of a number of them, especially those that were doing relatively well at the beginning of the 21st century. And this is precisely what this book is about.

Survival and Development of Language Communities reviews the major challenges being faced by a number of societies which have as their basic means of communication a language with a few million speakers – in this case, between 1 and 25 – and analyses how these problems are being dealt with in each case. Some of these challenges are obviously extremely local, but the reader will realise that many others are shared across borders, sometimes to an astonishing level. The book leads us to discover, for instance, that even within a presumably united Europe and in the midst of globalization, administrative and political borders constitute strong barriers for linguistic and cultural exchange, between closely related neighbours and even within the same linguistic communities. The reader will discover that speakers of these languages still feel that it’s up to them to converge towards speakers of big languages, even when political dominations evaporated decades ago. The volume also confirms that most, if not all, of these communities are clearly established in a bilingual and even multilingual paradigm, and it shows some of the contradictory ways this reality is dealt with in every case.

Probably the most important contribution of this book is that it furnishes the readers with clear evidence for the existence of linguistic life beyond the global languages. From a demographic point of view, none of the communities analysed here constitutes even 0.005% of mankind. But in spite of this, all of these languages constitute effective means of communication in prosperous, globalised societies, and are used in virtually all spheres of life, from governmental activities to the private sector, and from kindergarten to higher education. For those who claim that a stampede away from diversity is inevitable, Survival and Development of Language Communities makes it evident that linguistic diversity can be sustained, provided that the conditions are met.

For more information about Xavier’s research please go to his website on medium-sized language communities.