In January we published Multilingual Perspectives on Child Language Disorders edited by Janet L. Patterson and Barbara L. Rodríguez which explores the issues surrounding multilingual children with various language disorders. In this post, the editors explain how the book will be useful for speech-language pathologists as well as researchers in the field. 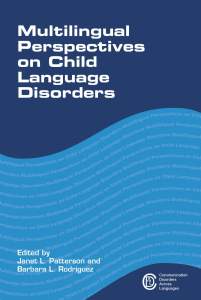 What good timing! Two questions addressed in our edited volume, Multilingual Perspectives on Child Language Disorders, appeared on an American Speech-Language and Hearing Association discussion board in the same week the book was published. The first was from a speech-language pathologist (SLP) seeking research to share with parents who have been told NOT to speak Spanish (the home language) to their children and “stick to English” in order reduce the language processing demands on their children. The SLP was concerned that this misguided advice was being given to families of children with Down syndrome by personnel in more than one school district. Four days later another SLP asked for research and advice on counseling the parents of a 2-year-old girl who may have an autism spectrum disorder (ASD). The parents had planned to raise their daughter bilingually (Dutch and English), but they wondered if they should speak only English to their daughter in view of her significant communication delays. These questions are specifically addressed in chapters on bilingualism and Down syndrome (by Mandy Kay Raining-Bird) and bilingualism and ASD (Stefka Marinova-Todd and Pat Mirenda).

We hope our book will prove to be a useful resource for SLPs and for researchers interested in cross-linguistic work in child language disorders. The chapter authors conduct research and provide services across the globe. The book includes chapters on language disorders among bilingual and multilingual children with specific language impairment, as well as a variety of developmental disabilities, and monolingual children who speak languages other than English.

Collaborating with the contributing authors has been a great experience. We have enjoyed learning about diverse topics including cross-linguistic research on Williams syndrome (Vesna Stojanovik), the challenges multilingual children with fetal alcohol spectrum disorders (FASD) face and evidence-based intervention approaches (John Thorne and Truman Coggins), manifestations of specific language impairment, dyslexia and ASD in Cantonese-speaking children (Carol To), and a framework for providing early intervention services to multilingual families with a focus on North Indian-speaking families in London (Jane Stokes and Nita Madhani), as well as chapters on assessment considerations and tools developed for use with children who speak French (Elin Thordardottir), Turkish (Seyhun Topbaş and Ïlknur Maviş), and Spanish (Barbara Rodríguez).

We were struck by the common themes and patterns that emerged among authors who work with such different populations and typologically diverse languages. Many authors highlighted the need for assessment tools that focus on key structures for the language being tested and the need for assessment tools that are diagnostically accurate.  Although the specific structures vary across languages, several authors are conducting research to address the global need for language-appropriate assessments. In addition, assessments for some children need to include complex discourse demands (FASD) and detailed examination of specific skills, such as certain areas of pragmatics, morphology, and use of intonation patterns (Williams syndrome). In the area of treatment, several authors highlighted the importance of adapting intervention to include culturally congruent practices. The value of cross-linguistic research for understanding the nature of language disorders associated with specific syndromes also was highlighted in several chapters. Although the chapters in Multilingual Perspectives on Child Language Disorders do not cover every language and every situation, we are confident the book provides researchers and clinicians with a broad-based perspective on child language disorders that supports evidence-based practice and stimulates further research.

For further information on the book please see our website. You might also be interested in other titles in our Communication Disorders Across Languages series such as Assessing Multilingual Children and Multilingual Aspects of Speech Sound Disorders in Children.