Skip to content
elinorrobertson in applied linguistics, author, news, translation 17 May 201616 May 2016 848 Words

In April we published New Insights into Arabic Translation and Interpreting edited by Mustapha Taibi. This book examines the key issues surrounding translation from or into Arabic. In this post, Mustapha introduces the key themes of his book and reveals how it fills a gap in the Eurocentric field of translation studies.

A number of Translation Studies scholars (e.g. Gentzler, Tymoczko, Trivedi and Cheung) have pointed out the relativism surrounding the concept of ‘translation’. The different terms used in different languages to refer to this activity may yield different understandings, connotations and approaches. This implies that Translation Studies would not be what it is (or what it has been until recently) if it had been decentralised earlier and different local perspectives had been considered. As Maria Tymoczko suggests in Enlarging Translation, Empowering Translators, “There is a need in translation studies for more flexible and deeper understanding of translation, and the thinking of non-Western peoples about this central human activity is essential in achieving broader and more durable theories about translation.” 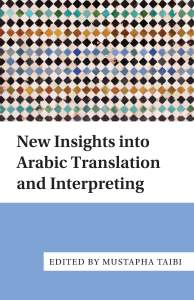 As a student, and later as a lecturer, in interpreting and translation, it didn’t take me much effort to note that the textbooks and references in use are almost exclusively by European or North American authors. Some languages and cultures have been predominantly on the ‘consumption’ side of theories and research in these fields. The Arab World and Arabic are a case in point. In his introduction to my new book New Insights into Arabic Translation and Interpreting, Emeritus Prof. Stuart Campbell writes:

“Despite the increasing surge of scholarship on translation since the seventies, European and North American voices have dominated the field and largely shaped it. With a few notable exceptions such as Mona Baker and Basil Hatim, it is only in the last decade that Arab scholars have begun to add their voices in substantial numbers; on the whole, Arab scholarship has been a “consumer” rather than a “producer” of new ideas in translation research”.

As a result of a shortage of Translation Studies works in and on Arabic, Arab translation and interpreting scholars, teachers and students often need to use references that were developed based on languages and socio-cultural contexts other than Arabic and the Arab culture.

New Insights into Arabic Translation and Interpreting is a new contribution which bridges this gap. It offers translation students, teachers, researchers and practitioners a collection of articles by established as well as young researchers from different parts of the world (Morocco, Saudi Arabia, United Arab Emirates, Australia and Spain), addressing translation in the Arab World, translating from and into Arabic, and teaching translation from and into Arabic, with a special focus on new fields of study and professional practice, new lines of research and innovative teaching approaches and resources.

At the same time, the book is a new contribution which decentralises Translation Studies, in the sense of offering ‘local’ perspectives on translation and interpreting. Although European and North American scholars are abundantly cited in its chapters, the book looks at translation and interpreting from the angle of sociolinguistic and socio-cultural contexts that are quite different from the Western situations that have dominated the Translation Studies scene so far.

As an example, community interpreting and community translation have been associated in the literature with migrant communities in Europe and North America. The publications available usually refer to ‘non-English/French/Spanish speakers’, ‘speakers of minority languages’, ‘culturally and linguistically diverse (CALD) users’ and so on. ‘Periphery’ languages such as Arabic, Swahili, Wolof, Chinese and others are categorised as ‘minority’ languages or as the languages of disempowered migrants and refugees. Some chapters in this book reverse the picture by bringing to the scene public service situations where Arabic is the mainstream language and other languages, including European ones, are ‘public service user’ languages. Chapter 3 in particular takes community translation and interpreting to a territory which is thus far unfamiliar: language services during the annual pilgrimage in Saudi Arabia.

Another example is the chapter by Said Faiq: the author notes an imbalance in the translation-mediated flow between Arab and Western cultures and questions the “master discourse”, which affects translation from and into Arabic at different levels. He concludes with a call for translation that facilitates and promotes intercultural understanding. (This should be the role of translation by definition, but that is not always the case): “A critical understanding of the ways in which master discourses operate might contribute to more efficient self-monitoring on the part of all involved in translation, and might lead to making it a true process of intercultural understanding rather than a way of reinforcing existing representations and images of one culture about another.  This can be achieved through a cross-cultural appraisal of the discourses underlying translation and translating with a view to better understanding the issues of identity (self and other), translation enterprise (patronage, agencies, translators) and norms of representation (master discourse)”.

For further information about the book please see our website. If you found this interesting, you might also like another of our titles: Cultural Encounters in Translation from Arabic edited by Said Faiq.