Last month we published the book Prescription and Tradition in Language edited by Ingrid Tieken-Boon van Ostade and Carol Percy. In this blog post, Carol tells us more about what inspired her and Ingrid to put the book together.

The academic study of linguistic prescriptivism is relatively new. Historical linguists like my co-editor Ingrid Tieken-Boon van Ostade and me, Carol Percy, have both hosted conferences on the topic. My bilingual conference in Canada inspired essay collections that focussed mostly on English and on French. Ingrid’s meeting in the Netherlands was truly multilingual in scope, and realizing the significance of this we commissioned chapters on a wide range of languages for Prescription and Tradition in Language. Our multilingual mandate and our English-language medium really highlight how the codification of language norms needs to be considered in unique cultural contexts, across Time and Space.

Some of our contributors consider prescriptive traditions for English. We see journalists and academic linguists contributing to the formation and dissemination of norms. In a chapter contrasting the prescriptive traditions of English with French, the pronunciation guide compiled by lexicographer Robert Burchfield for the BBC (1981) underscores the broadcaster’s “semi-official status” in the absence of a state-sponsored language academy for English. In reviews of Burchfield’s supposedly ‘descriptivist’ edition of Fowler’s Modern English Usage (1996), we can compare the opinions of journalists and linguists. And in what is actually a very depressing chapter, we see that pervading popular ‘news’ about language (whether the Middlesborough dialect or immigrant children’s bilingualism) is an inflexibly unwelcoming ethnolinguistic nationalism. Indeed, another contributor makes the case that traditional prescriptive rules define communities, naturalize assumptions (about rules and the people who observe them, or don’t), and thus ultimately validate prescriptive rules. This argument is probably not English-specific! 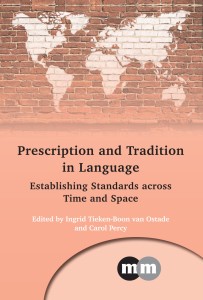 More contributors consider prescriptive traditions for other countries and languages—and we are delighted to be disseminating this material in English. For major languages including French, Russian and Chinese, our contributors synthesize traditions and analyze challenges posed by globalization and new media. In the state’s official Dictionary of Modern Chinese (2012), the inclusion—and exclusion—of words referring to economic and social changes is discussed in the media. English delivers technological terms to languages including French and Russian. In France, official committees devise French equivalents to English terms and disseminate them on websites as well as in print. For Russian, shifts in its status and its norms are particularly visible (and open to debate) as the rise of new media coincides with the dissolution of the Soviet Union.

Some of our chapters contrast the status and standardization of the ‘same’ language in different contexts. Nineteenth-century Dutch in the temporarily-reunited Low Countries varied less in practice than in commentators’ imaginations. But the Russian written officially in Kazakhstan or spoken as a lingua franca in Dagestan is diverging from what is known as ‘Moscow Russian’. And although Macedonian is now recognized as a national language, elsewhere it is a minority language, with official recognition differing from country to country. Basque is recognized as a minority language in Spain but not yet in France: a committee is currently crafting a standard that can be spoken colloquially in multiple contexts. And (how) do sociolinguistic norms for German change when it is taught to foreigners?

While our collection can’t consider every language, it contains general and theoretical chapters. (How) do language norms vary by writing system? (How) does a language’s multilingual vs monolingual contexts or spoken vs written use relate to establishing its norms? Pam Peters recontextualizes these and other issues in her generous Epilogue to the volume. Both Ingrid and I learned (Ingrid “learnt”!) a lot from our contributors when we edited this volume, and we hope you enjoy it.

For more information about this book, please see our website.