This month we published Optimizing Language Learners’ Nonverbal Behavior by Tammy Gregersen and Peter D. MacIntyre. In the first of a two-part blog post, Tammy and Peter explain what inspired them to write a book about nonverbal communication. 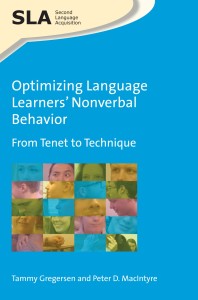 Readers may ask themselves why two people who have dedicated much of their academic careers to language-related issues would suddenly write a book on communicating without language – or at least making meaning through means that accompany the verbal. In the paragraphs that follow, we tell our stories…

Long before I ever read literature on Emotional or Interpersonal Intelligence, I anecdotally surmised that those individuals who had “people smarts” simply were those people who could read others’ nonverbals. They could make the initial acquaintance of a person and within milliseconds of their interaction, these people-savvy folks were able to pick up the other’s vibes and effectively act accordingly. Whether through conscious inspection or subconscious osmosis, I knew in my gut that such mind-and-body-language readers were gifted with the instantaneous interpretation of the bombardment of nonverbal cues that characterize all human interaction. I was hooked, and my curiosity about this phenomenon propelled me to investigate it further.

But now I get ahead of myself…my nonverbal intrigue actually started long before I could even process the simplest of thoughts. It began with my relationship with my dad – which means within hours of being born. If you read the Dedication Page of Optimizing Language Learners’ Nonverbal Behavior, I used this opportunity to honor my father. It says in part, “To my father, F. Neal Gregersen, who, had it not been for his characteristic silence, I would never have understood the awesome power of nonverbal communication.” You see, my dad is a man of very few words, so if one wants to have a verbal conversation, it often turns into a monologue. However, one would be gravely mistaken to think that he doesn’t communicate. Although he doesn’t often use language, those of us who know him well only need to see the smallest change in his demeanor to know exactly what he is thinking. As I was growing up, his only means of discipline was what the five of us kids deemed, “The Look”.  Whenever we were the recipients of it, we immediately shaped up. Hence, I understood early in my life the immense power of nonverbal cues and I wanted to know more. That was then and this is now….

It was my first semester at university, one of our assignments was to do a review of a research paper. I chose a paper by Professor Nancy Henley on ways in which nonverbal communication relates to interpersonal power – the doctor touches the patient and not the other way around because the doctor is in a position of power. It was nothing short of a revelation! Other examples in Henley’s work brought to light the complexity of everyday communication. At the time I was taking courses in Psychology and Interpersonal Communication, and Henley’s work forged such a fascinating bridge between the disciplines, I’ve been hooked ever since. It is powerful to realize that I was a full and active participant in a process that had never been explained overtly, but I knew the rules – everybody knows the rules. I wondered, how is that possible?

I am sure many readers of this blog have had a similar experience in doing research on a topic – a process that is right in front of you is explained in a new way. But there is something unique about nonverbal communication, it is so ubiquitous and so effective in conveying information, yet it seems so natural. When we then add the idea of language and culture into the mix, and that sometimes people in different places have different ways of doing things, nonverbal communication becomes all the more interesting.

Like Tammy, I am dedicating this book to people who taught me a lot about nonverbal communication, my teachers and especially my mother. Unlike Tammy’s dad, my mom had no trouble with verbal communication, but for her the message was all in the tone of voice. I can vividly recall when I said that I didn’t want to do some chore, she would say “never mind.” By conventional definition, the words said I was off the hook but the unmistakable tone meant I had better get to it.

We hope that people will enjoy reading the book as much as we did writing it. Please be sure to check out the videos that demonstrate nonverbal concepts. Videos are embedded in the ebook and available on the web for the printed book. The videos were great fun to produce and add a unique dimension to this book – more on that in another blog entry…

For more information about this book, please see our website. The videos that accompany the book can be found on our YouTube channel. If you found this interesting, you might like the other books Tammy and Peter have published with us, Capitalizing on Language Learners’ Individuality and Positive Psychology in SLA (co-edited with Sarah Mercer). Watch this space for Part 2…