Last month we published Raising Multilingual Children by Julia Festman, Gregory J. Poarch and Jean-Marc Dewaele. In this post, Jean-Marc discusses his own experience of bringing up a multilingual daughter and explains what inspired him and his co-authors to write the book. 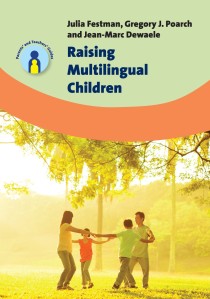 Parents everywhere in the world want the best for their children. It means looking after their physical and psychological health as well as their education. I remember reading books with my wife when she was pregnant with Livia about the best ways to raise children. We felt a little overwhelmed by the amount of information and the occasionally contradictory suggestions on how to be good parents. We were also struck by the strong opinions people had about early multilingualism. Many expressed doubts about it being beneficial for the child “before a first language” settled in: wasn’t there a risk of the child ending up with a “muddled” linguistic system, unable to distinguish between the languages? Others wondered whether growing up with multiple languages might lead to an absence of clear linguistic and cultural roots for the child.

Having read my former PhD supervisor, Hugo Baetens Beardsmore’s (1982) book, Bilingualism: Basic Principles, my wife and I decided that the potential benefits of early multilingualism outweighed the potential drawbacks, and when Livia was born in London in 1996, my wife used Dutch with her, I used French, with English spoken all around us. She picked up Urdu from her Pakistani child-minder, who spoke English and Urdu with the English-speaking children. We were a bit concerned that the introduction of a fourth first language might be too much for Livia, but this fear turned out to be unfounded and her languages developed at a normal pace – though Urdu faded away after the age of two and a half when she moved to an English nursery school. From the moment she started speaking, she was perfectly capable of separating her languages, and switching from one to another effortlessly depending on the linguistic repertoire of her interlocutor. She still sounds like a native speaker in her three languages and consistently got some of the highest marks for English during her primary and secondary education. The brain of a baby is like a sponge: sufficient and regular linguistic input will allow it to absorb the languages in its environment. There is no danger of the brain ‘overheating’ because of exposure to too many languages.

Livia’s case is the first story in the book Raising Multilingual Children that has just come out. It includes Livia’s own view on her multilingualism at the age of ten and sixteen. My co-authors Greg Poarch and Julia Festman tell the story of their trilingual children. Greg’s son, Loïc, speaks two minority languages (English and Dutch) at home and uses German outside of his home. Julia’s daughter and son, Aya and Noam, grew up as trilinguals from birth, with two minority languages (English and Hebrew) at home and German outside. The situation changed when Julia’s husband passed away and the input in Hebrew dried up. Now German is the majority language spoken inside and outside of their home and English is the language used at school. Greg, Julia and I decided to pool our family experiences with three languages to produce a book for the general public informed by the academic research. We adopted an issue-related approach and agreed that we would present tips based on examples from our daily lives to highlight things that worked, and strategies that backfired with our children. The book contains concrete and practical ideas to implement multilingualism in the household.

For more information about this book, please see our website. If you found this interesting, you might also like A Parents’ and Teachers’ Guide to Bilingualism by Colin Baker, Language Strategies for Trilingual Families by Andreas Braun and Tony Cline, and Xiao-lei Wang’s books, Growing up with Three Languages and Maintaining Three Languages.