This month we published Visualising Multilingual Lives edited by Paula Kalaja and Sílvia Melo-Pfeifer. In this post the editors explain how they used visual methodologies to examine multilinguals’ emotions and their expression of those emotions. 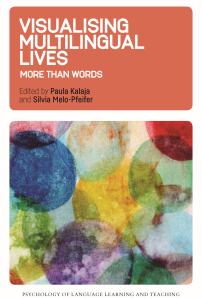 It is only gradually being acknowledged that multilinguals, or people who use more than one language, form the majority of people in the world, not monolinguals. However, multilinguals find themselves in different contexts and for different reasons, and their knowledge of the languages varies. In addition, becoming and being multilingual are quite heterogeneous and individual achievements are experienced very differently by subjects, depending on their contexts and life trajectories.

There are two approaches to multilinguals. The objective approach attempts to figure out the mechanisms inside a multilingual’s mind and trace developments in his or her knowledge of any language (and possible stages in the process) in terms of mastery of a linguistic system or in terms of an ability to communicate or interact with others in the language. In contrast, the subjective approach attempts to find out how a multilingual feels about becoming or being multilingual, or what the different languages and their use mean to him or her personally. In other words, the second approach focuses on multilinguals and their lives as subjectively experienced or as lived, including positive and negative emotions, attitudes, beliefs, visions and identities.

Traditional methodologies (such as questionnaires, interviews and observation) may not be the most suitable options when tackling issues like this, as they may suffer from a “linguistic bias” in their attempts to describe or explain emotions, which are not always easy to put into words. So, to address these sensitive issues, we decided to make use of visual methodologies of various kinds, including drawings and photographs, as mediators between emotions and their expression by multilinguals. However, as a rule, visual data were complemented with other types of data, and the starting points and ways of analysing the pools of data for form and/or content vary from one study to another. But even if visual materials are not always used as the only pool of data, they bring to the foreground aspects that individuals choose to visually represent and comment on. So, using visual methodologies may also be about what is not visible, not represented or not valued by the multilingual subject.

As editors of Visualising Multilingual Lives, we invite the readers to learn about visual narratives accounted by multilinguals in different parts of the world, printed in full color. The different chapters of the book offer coherent, original and individualized insights into multilingualism as experienced in three domains: the multilingual self, the multilingual learner and multilingual teacher education. With a preface by Claire Kramsch, the volume acknowledges the potential of arts-based methodologies in grasping the singularities of multilinguals and their linguistic biographies.

If you found this interesting, you might also enjoy Language Teacher Psychology edited by Sarah Mercer and Achilleas Kostoulas.