This month we published Gender, Neoliberalism and Distinction through Linguistic Capital by Mark Fifer Seilhamer. In this post the author talks about the research that informed the book. 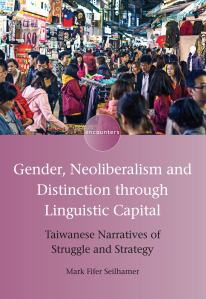 The title of my new book just out this month is Gender, Neoliberalism and Distinction through Linguistic Capital: Taiwanese Narratives of Struggle and Strategy, with ‘Gender’ prominently foregrounded as the first element of this title. But while ‘Neoliberalism’ and ‘Distinction through Linguistic Capital’ had been dominant themes since the very beginning of the manuscript’s preparation, the extent to which my focal participants’ (female) gender impacted their experiences is an issue that was addressed only fleetingly in the manuscript I originally submitted to Multilingual Matters back in 2016. This early version featured a fairly straightforward class-focused Bourdieusian analysis of my participants’ narrated experiences, seemingly (in retrospect) oblivious to the fact that gender does indeed play an outsized role in my participants’ stories, as well as in the dynamics of multilingualism in Taiwan more generally.

The centrality of gender to my participants’ experiences as language learners was pointed out by a reviewer, who asked what I made “of the fact that some students are quite successful at making friends with foreigners, getting free language practice, lining up Skype partners, having boyfriends to talk English with and to pay for trips abroad”. This reviewer went on to pose other questions that served to guide my radical overhaul of the manuscript: “Are young women considered ideal candidates for the sorts of international marketing/public relations/sales jobs many of the women get? How are ideologies of language acquisition gendered in Taiwan, and are these women seen as compromised in terms of their relationships and friendships with foreigners?”

Ideologies of language acquisition are indeed highly gendered in Taiwan, with the idea that males are simply no good at learning languages regarded by many as a commonsensical notion. This common belief results, of course, in language study beyond minimum requirements being almost exclusively the preserve of females. At the start of this research, I did not set out to include only female participants. In the junior college program specializing in languages that I was recruiting participants from, male students were, however, very much in the minority and my pool of possible participants consisted almost entirely of female students. Because it is commonly believed that female brains are specifically wired for learning languages, young women are encouraged to study foreign languages and pursue careers in international marketing, public relations, and interpreting – the sorts of occupations that my participants did, in fact, wind up in. My participants, in their interviews, had indeed addressed Taiwan’s gendered language learning ideologies and the notion of gendered language work, as well as positioning by others due to their relationships with foreigners. In my revisions, the focus on gender and the intersectional questioning that this focus necessitated really did change the fundamental character of the book.

In what now seems to be a glaring omission, I neglected to include an ‘Acknowledgements’ page for this book. This can be attributed to the extreme sense of relief I felt when the editors allowed me to go over the stipulated word limit with my final revised manuscript. Looking back now, I’m pretty sure they would have had no problem with my adding an ‘Acknowledgements’ page, but at the time, I was reluctant to request any more words for anything. I will take this opportunity now then to acknowledge the assistance and contributions of numerous individuals: my study’s participants, without whom the research and book would not have been at all possible; my doctoral thesis supervisors, Lionel Wee, Joseph Sung-Yul Park, and Mie Hiramoto; and everyone at Multilingual Matters, who were all incredibly patient with me, granting me extension after extension as I struggled to address reviewer concerns. And I am also immensely grateful to the anonymous reviewer who alerted me to the inadequacies of the earlier version of my manuscript – before gender was prominently brought to the fore.

If you found this interesting, you might also like Language, Education and Neoliberalism edited by Mi-Cha Flubacher and Alfonso Del Percio.