This month we published Decolonising Multilingualism in Africa by Finex Ndhlovu and Leketi Makalela. In this post the authors introduce the book. 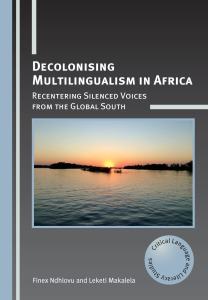 It is often easy to perceive common sense assumptions about the nature and use of language in society as something of a natural kind – that it has always been the way it is. Yet, as we have come to know, we live in a world that has been invented or created following particular ideologies, belief systems and ways of knowing. Languages; our understandings of language diversity (multilingualism) and their practical applications in social and educational policy settings are not immune from ideological habits and practices that are traceable to the Euro-modernist colonial order of the world.

In Decolonising Multilingualism in Africa, we interrogate the problematic nature of common sense assumptions about languages and language diversity. We draw on data from the Global South, and specifically from diverse African communities, to illustrate the particular point about how popular and dominant understandings of multilingualism are tied to the colonial project of categorising languages and identities for the purposes of domination, control and the exercising of power. The packing of languages – through such instruments as national language policies – in a hierarchical order: minority vs major; official vs non-official; standard vs non-standard and so forth, is symptomatic of this logic of what we call global coloniality of language.

In this book, we present alternative approaches for re-imagining multilingualism. We introduce a promising avenue for unsettling colonial ways of knowing by taking into account diverse local knowledges about language and what living with multiple languages means for ordinary people in their everyday lives.

The book emphasises the importance of looking at multilingualism from the perspective of ‘languages of the people’ (the real everyday language practices of real people). This is a counter-narrative to the dominant understanding of language diversity that puts emphasis on ‘languages of the state’ (those countable language-things that were co-constructed with the modern nation-state). We re-visit the precolonial archive and draw attention to previously undocumented and often ignored knowledge traditions about language diversity, what we call ‘socially realistic multilingualism’.

Our goal is to enrich conversations about language diversity among both academic and non-academic communities; and to inform policy frameworks in such domains as language and literacy education, social service provision, intercultural dialogues, immigration and citizenship, and related areas where language is implicated. The book seeks to inspire an audience from differing social, cultural, political and ideological backgrounds to think outside the box; to appreciate that there are diverse ways of knowing about languages and multilingualism. Some such traditions of knowing, particularly those from the Global South, are currently marginalised and not present in mainstream conversations about what it means to live life and live it well with multiple language resources.

The book joins contemporary conversations on this topic in arguing that Southern ways of knowing are equally valid and legitimate. It is important for us to learn in partnership with the subaltern communities of the Global South and to re-centre their stories in our efforts to co-create alternative approaches to valuation of knowledge.

If you found this interesting, you might also like Rethinking Language Use in Digital Africa edited by Leketi Makalela and Goodith White.