We recently published Language Standardization and Language Variation in Multilingual Contexts edited by Nicola McLelland and Hui Zhao. In this post the editors explain how the volume came together. 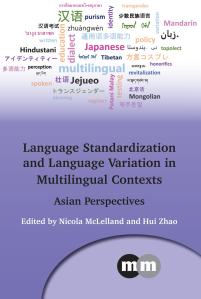 It’s no accident that this volume is a cooperation between two editors from quite different research backgrounds: one of us (McLelland) comes from a European tradition of language standardization studies, while the other (Zhao) is trained in variationist sociolinguistics, with a particular focus on Chinese. What brought us together for this collaboration was our shared desire to shed new light on language standardization and variation in three crucial ways.

First, we wanted to bring language standardization and language variation studies, which in effect examine two sides of the same coin within sociolinguistics, into conversation. Second, we wanted to shine the light firmly on the languages of Asia, thus far badly under-represented in our fields compared to Europe and the English-speaking world. Third, we wanted to add momentum to the growing recognition of multilingualism in sociolinguistic studies.

Every chapter in the volume, therefore, deals with language variation and/or standardization in a multilingual context in Asia. In many multilingualism case studies, one of the languages involved is English, so it’s worth noting that while English is indeed relevant in several of our case studies, all of our authors tackle contexts that are already multilingual before we factor in English.

Readers will, we trust, draw their own lessons from the volume, but as we send it into the world, it’s worth highlighting what we editors have been privileged to learn from the project ourselves. We’ve certainly learned more about the “hidden multilingualisms” of the world, not least within China: our volume includes contributions looking at minoritized languages within China’s borders, including Mongolian, Sibe, Tibetan, and Zhuang, as well as shedding light on the relationship between different Chinese languages and varieties spoken both within China (Beijing, Shanghai) and elsewhere (Malaysia).

Several studies in our volume are also a reminder to those of us schooled in the historical language standardization of certain major European languages that standardization remains a burning real-world aspect of contemporary language planning and policy, for example as it concerns Tibetan and in Patani Malay spoken in Thailand.

We’ve also been confronted once more with how intimately language standardization and/or the acceptance of variation and of language varieties are entangled with questions of social, cultural and political power – whether it’s a case of exercising power in deciding how language varieties are talked about (e.g. the case of Jejueo in South Korea), or in seeking to resist hegemonic power through language standardization (Zhuang in China), or in how language usages express identities (e.g. dialect “cosplay” or the performance of transgender identity in Japanese).

Our volume is in English, even though for us and for every one of our contributors, English is just one language among our multilingual repertoires. The irony, for a volume focussed on “multilingual contexts”, is not lost on us. But we are grateful to our contributors for giving us – and our readers – insights into rich and diverse instances of multilingual contexts of language standardization and variation in Asia. We trust that readers will share our appreciation of those new perspectives too.

This volume is the result of a conference held at the University of Nottingham Ningbo China, as part of the project Multilingualism: Empowering Individuals, Transforming Societies, funded by the Arts and Humanities Research Council (www.meits.org ).

If you found this interesting, you might also like Language Prescription edited by Don Chapman and Jacob D. Rawlins.