This month we published Language Learning and Teaching in a Multilingual World by Marie-Françoise Narcy-Combes, Jean-Paul Narcy-Combes, Julie McAllister, Malory Leclère and Grégory Miras. In this post the authors give us some advice for teaching multilingual learners.

Teaching a language or content in a multilingual classroom (or any type of learning environment, such as telecollaboration or distance learning) is becoming the norm as well as a challenge faced by more and more teachers. But it is also an asset, as learners have opportunities to communicate with peers of different origins, cultures and backgrounds and thus develop tolerance and respect for others. To maximise the benefits of these opportunities while minimising the potential threats, here are a few tips to consider: 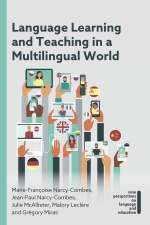 For more information about the book please see our website.

This month we published The Multilingual Reality by Ajit K. Mohanty. In this post the author talks about the inspiration behind the book.

Pinky’s dreams had evaporated. She dreamt of touching the sky in her school; as her parents put her there, the glitter in their eyes was reassuring for Pinky. The Saora girl was an unstoppable chatterbox; her home language, Saora, was polka dotted by some Odia, Hindi, English and other languages as she grew up and moved out into her neighbourhood, the weekly market place and the tribal festivals. But a few days in school and she gradually lost her chatter. Her parents were sad that Pinky did not want to go to school. “I don’t understand the teacher, I don’t understand the books”, she told her mother.

I met Pinky’s father during a visit to set up our MLE Plus project in the local primary school selected by the Government of Odisha as a new multilingual education (MLE) school in Saora. He ventilated his agony over Pinky’s unwillingness to go to school, but, he said, he understood. As a child, he also ran way from his school because then he did not know Odia, the school language. I told him that the school will teach in Saora in Grade 1 from the next year. Pinky had lost a year but was happy to be back. During one of my visits to her class, when Pinky was in Grade 2, I was amazed to observe her telling a Saora story for nearly 11 minutes while her friends listened with attention. She was definitely enjoying her school in her own language, something that millions of children from indigenous, tribal, minor and minoritized (ITM) languages in the world are deprived of.

Despite large-scale international movement of people, languages are no longer considered a medley for an interesting colourful world – one full of cultural hues, diversity, linguistic rights and pride. Schools and states (and sometimes communities and parents) ensure that many native languages are not passed on to the next generation. In 1907, Roosevelt cautioned the immigrants into the US and said “We have room for but one language here, and that is the English language”. Now the world seems to have limited room for languages except the few dominant ones.

The world seems to be losing its colour to the devouring supermarket culture with limited brands dominating – limited languages, limited cultures, limited varieties. The multitude of languages used by our ancestors are lost or are on the verge of extinction. It is a tough battle between “language hegemony and discrimination” and the promises of “the cultural and educational richness of living with languages”.

I grew up in a beautiful multilingual world where I had the freedom to move naturally and spontaneously between people and languages, unconcerned by any boundaries and infringements. I did not have to bother about my own inadequacies in the languages I encountered, nor did I have to count the languages I knew or did not know. I was taught in my mother tongue and was gradually introduced to other languages that I embraced. Levels of my competence in languages around me did not have to be judged.

I grew up with an understanding that, like our fingerprints and DNA, we are supposed to be unique and diverse – that one size fits all is an aberration and is limiting to our linguistic and cultural diversity. If that be the case, why should millions like Pinky be deprived of being educated through their Mother Tongue?

This book is an account of my journey as a researcher and a coparticipant in the multilingual world from the perspectives of the people and communities at the margins – people being forced into a less diverse and more insipid world. Through my book, I have sought to share the complexity, the agony and the beauty of living with languages in a multilingual world. My book handles concerns and issues that have confronted me and the questions prompted by my encounters with the ITM communities and their education. The issues necessarily go beyond the question of languages and transcend the borders of India, because they are tied to questions of power, the processes of domination and subordination in all societies. The specific themes in the book echo concerns from the ITM perspectives – both local and global. The themes reflect some interrelated aspects of what it means to live with languages in a multilingual society.

Multilingualism is not about languages; it is about life and living, about lifestyles, about world views. This is what I realised growing up with many languages around me. These languages made my lifestyle possible. They were not just part of my expressive and receptive experience as I moved across my social world, they combined to make this world for me. I certainly did and still do have a mother tongue but my total experience was never fragmented by my mother tongue and other tongues.

You can contact Ajit Mohanty with any questions and comments at the following email address: ajitmohanty@gmail.com.

For  more information about this book please see our website.