This month we are publishing Nigel Krauth’s book Creative Writing and the Radical which explores the ideas of innovation and experimentation within creative writing. In this post, Nigel discusses how he taught students to break the rules and how the way creative writing is taught must change to incorporate the ever-evolving modern world.

I’ve taught creative writing for 25 years at Griffith University, but only in one course – my Radical Fictions course – have students thanked me for teaching them how to break the rules. In addition, they’ve said: ‘I wish I had taken this course at the start of my degree, not at the end of it’.

In reply I used to say: ‘You need to know the rules before you can break them well.’ But nowadays I don’t say that. The students know already that rule-breaking is part of the mainstream in literary publishing.

My book Creative Writing and the Radical traces the history of experimental writing in the 20th century and earlier, and shows how those gallant, devoted writers who sought to escape the strictures of the page – who made typography dance, presented narrative in manoeuvrable fragments, introduced pictures amongst the prose, and did away with the conventions of the printed and bound book – were actually onto something. They were rehearsing for the future.

Multimodal writing – based on ways of reading spatially which developed since TV and computer screens took over our reading/viewing habits – breaks the rules of traditional linear text writing in favour of writing which is not constrained by the densely-printed page but is oriented to the hypermedia possibilities of the app book, web publication, formats like YouTube, Instagram, Facebook, PowerPoint, and other applications that combine text, visuals, audio – and even haptics, potentially.

In my Radical Fictions/Experimental Writing course last semester, I had a student who presented a suite of poems using QR codes on stickers located in appropriate settings, such as a poem about departure accessible from a QR label in an airport. I also had a narrative about a young woman’s enviable married life presented in images and short texts on Instagram, alongside a web journal which showed what was really going on in the relationship. And I had a romance genre novelette presented in PowerPoint with images and audio subtly supplementing – and subverting – the reading experience.

When students are shown Kate Pullinger and Chris Joseph’s collaborative web novel Flight Paths (2012), or Chapter 12 (the PowerPoint chapter) of Jennifer Egan’s A Visit from the Goon Squad (2010), or the reissue of Marc Saporta’s novel-in-a-box Composition No 1 (1963) by Visual Editions (2011) which can also be read on shuffle on their iPads, they quickly understand the possibilities of creative writing in the digital world and the changes most likely to happen for fiction, poetry and memoir in the future.

My students tend to have no particular visual arts or digital writing training, and not all feel confident about working on digital outcomes. As has happened over many years now, I still receive submissions based wonderfully in collaging, cut-and-paste, concrete typographical, discontinuous narrative and constraint/combinatory techniques as pioneered by the Dadaists, Oulipians and generally by experimental literary writers on paper.

This year one student handed in a story about a child who develops a psychotic disorder in his teenage years, as told through the parental words added to birthday and Christmas cards throughout his shortened life. The greeting cards (almost forty in number, purchased, hand-written upon, and submitted for assessment) show how the apple of the effusive parents’ eye becomes a stranger they have nothing left to say to. Another student, who in fact lived through 9/11 in New York, submitted a narrative in a hundred 6-word mini-stories – each printed on a torn strip of paper, a jam jar full of them – which looked like a retrieved collection of the confetti that rained down on that fateful day. This novelette in a jar, narrated from children’s viewpoints, seeks to understand what adult culture is doing to the world.

Traditional paper publishing too is changing: the experimental has been accepted into the mainstream. The best example is Jonathan Safran Foer’s Extremely Loud & Incredibly Close (2005), a highly acclaimed novel – and also a bestseller – which sets up complex interactions between text, layout, typography, design, graphics, colour, photography, literary forms and the structure of the codex itself. This novel is a master class in the possibilities of radical novel writing – a work that puts onto paper everything that the digital world can teach us about writing. It too is about 9/11’s explosion of American culture.

It stands alongside J.J. Abrams and Doug Dorst’s S. (2013), a novel on a Hollywood scale made from a myriad of visual pieces, and W.G. Sebald’s Austerlitz (2001), a novel which shows how memoir is significantly composed of photographic snippets.

For more information about Nigel’s book, please see our website. If you found this interesting you might also be interested in the other titles in our New Writing Viewpoints Series.

This month we published the 10th book in the New Writing Viewpoints series Towards a Poetics of Creative Writing by Dominique Hecq. In this post, the editor of the series, Graeme Harper, celebrates the achievements of the series.

I’ve always liked the number ten. To me ten embodies opportunity. While two is a pair, or sometimes a couple, and five is a handful, ten is the multiplication of these, five spirited couples or two hands full of opportunities. Viva the decade! 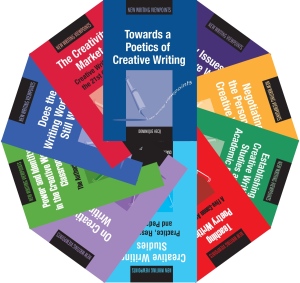 You can try denying ten’s inherently positive mystery, but it will keep on rising up and revealing itself. For example, most often you don’t have twenty small appendages, you have ten fingers and ten toes. What moments of brilliance, I’ve sometimes pondered, might occasionally happen in the interchanging of the qualities of these two dedicated sets of ten? This question occurs to me most often when grabbing something between my toes or when doing a handstand. When you turn ten years of age you might not truly be a teenager but you know something has changed for the better. You celebrate this without knowing exactly what’s coming next, but suspecting it will be interesting. From then on, after each decade, you celebrate again, in the same way and with the same feeling of possibility.

Ten casts an affirmative spell! The calendar labours to look connected to a month or a day that is ten years back: the numbers seem to be saying something much more than is immediately clear. You can see 2005 is missing something that 2015 clearly possesses. You sense that from a previous planting you now have a fine blossoming.

A moment ago, while I was writing this piece, an article appeared in my email inbox. It is entitled “Ten Things You Didn’t Know Last Week”. Ten is always watching to make the most of new experiences!

Ten years ago the New Writing Viewpoints series came into being. It took the liveliness and bravery of Multilingual Matters, reflecting the characters of Mike and Marjukka Grover, the insight of Commissioning Editor Anna Roderick, and the forward thinking of Tommi Grover to imagine that supporting such a thing had some potential, possibly even enough of that potential to create longevity.

Edited by Anna Leahy, Power and Identity in the Creative Writing Classroom (2005) was published to strong interest – not least because Anna was able to communicate the uniqueness of her book to her colleagues in the USA and because the creative writing academic community was looking for works that explored issues in the teaching and learning of creative writing and not finding much that delved very deeply. Certainly there were personal stories of workshops and worshopping, and “how to” books about writing fiction or poetry or screenplays, and works about how to write well, and books from Rhetoric and Composition specialists that touched on creativity, and handbooks and guides for students, but there was a limited number of books by creative writers and creative writing teachers that took a topic in the investigation of creative writing, in the teaching and learning of creative writing, and delved into that topic with a thoroughness that suggested there was empirical research, practical understanding and theoretical consideration being applied, as well as an awareness that there was more to discover, that there was even more to investigate.

Anna’s book did that. Others have done so too. Whether considering teaching techniques or research discoveries in creative writing, the books in the New Writing Viewpoints series are written and edited by experts from around the world, creative writers, teachers and researchers of creative writing, a community of practitioners and scholars that grows each year, and with each new book contributes to discussion of a human practice – that is, a discussion of creative writing – bringing new insights, new knowledge, new avenues for further thought and exploration.

New Writing Viewpoints reaches its ten year point with a sense that the curiosity that drove the founding the series, the courage and forward thinking of the publisher that made it happen, and the possibility and opportunity that always arrives with ten, is now truly blossoming.

In the next few months we will see the publication of Towards a Poetics of Creative Writing by Dominique Hecq, as well as Creative Writing and Education, an edited collection featuring contributors from around the world, in which I’ve had the pleasure of playing an editing role, and Creative Composition: Inspiration and Techniques for Writing Instruction, edited by Danita Berg and Lori A. May.

What Dominique and the contributors to Danita and Lori’s book and to Creative Writing and Education have in common is their commitment to advancing this exciting field of creative and critical practice. What they have in common too is that they will benefit from the support of Tommi and Anna, of Elinor, Sarah, Laura, Kim and others at Multilingual Matters in approaching the practice and analysis of creative writing, its teaching and its researching, with openness, enthusiasm and astuteness. Needless to say, I suspect ten would be very impressed!

For more information about the series please see our website. We are offering a special 50% discount on all books in the series until the end of the year. To obtain the discount just use the code NWV2015 at the checkout.