Last month we published Creative Composition edited by Danita Berg and Lori A. May. The book attempts to explore how creativity in compositition may be encouraged in student writers. In this post, Danita tells us a bit more about the book.

Yet we find that each of the journals speak to each other, as do the theories of writing. While different terms are used—collaboration instead of workshop, craft instead of invention—the journals are still speaking of process. Each of the fields can learn from one another, if steps are taken to conjoin the disciplines. 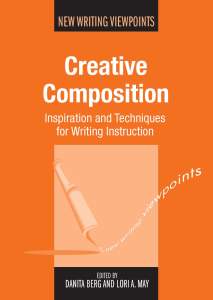 When Lori and I talked about creating a book that advanced that reconnection between disciplines, we realized that we were not the first in asking for such a teaching text. Theorists such as Wendy Bishop, Janice Lauer, Peter Elbow, and Donald Murray had been discussing those very topics for decades. Yet while steps were taken to talk about how the fields could complement and learn from each other, little was published that allowed the fields to truly reconvene.

Creative Composition: Inspiration and Techniques for Writing Instruction begins that discussion in earnest. The essays provided by top and emerging theorists in the field—among them Graeme Harper, Tim Mayers, Stephanie Vanderslice, and Anna Leahy—are the first steps in allowing these writing processes to learn from and inform each other. We think it is an especially important text in an academic field where instructors and professors are asked to be more generalists than experts in one field, able to teach a wide variety of genres and forms.

Danita Berg is English Department Director at Full Sail University, Orlando, Florida. Her research interests include creative writing studies, women’s voice in writing, and invention. She is also founder and Co-Editor of Animal: A Beast of a Literary Magazine. You can find her blog at www.danitaberg.wordpress.com.

Lori A. May is a writing mentor at University of King’s College, Halifax, Nova Scotia. She is Founding Editor of Poets’ Quarterly (www.poetsquarterly.com), and her other books include The Write Crowd: Literary Citizenship & the Writing Life (Bloomsbury, 2014) and The Low-Residency MFA Handbook: A Guide for Prospective Creative Writing Students (Continuum, 2011). Her website is www.loriamay.com.

For more information about the book see our website. You can also browse other books in the New Writing Viewpoints series.

This month we published the 10th book in the New Writing Viewpoints series Towards a Poetics of Creative Writing by Dominique Hecq. In this post, the editor of the series, Graeme Harper, celebrates the achievements of the series.

I’ve always liked the number ten. To me ten embodies opportunity. While two is a pair, or sometimes a couple, and five is a handful, ten is the multiplication of these, five spirited couples or two hands full of opportunities. Viva the decade!

You can try denying ten’s inherently positive mystery, but it will keep on rising up and revealing itself. For example, most often you don’t have twenty small appendages, you have ten fingers and ten toes. What moments of brilliance, I’ve sometimes pondered, might occasionally happen in the interchanging of the qualities of these two dedicated sets of ten? This question occurs to me most often when grabbing something between my toes or when doing a handstand. When you turn ten years of age you might not truly be a teenager but you know something has changed for the better. You celebrate this without knowing exactly what’s coming next, but suspecting it will be interesting. From then on, after each decade, you celebrate again, in the same way and with the same feeling of possibility.

Ten casts an affirmative spell! The calendar labours to look connected to a month or a day that is ten years back: the numbers seem to be saying something much more than is immediately clear. You can see 2005 is missing something that 2015 clearly possesses. You sense that from a previous planting you now have a fine blossoming.

A moment ago, while I was writing this piece, an article appeared in my email inbox. It is entitled “Ten Things You Didn’t Know Last Week”. Ten is always watching to make the most of new experiences!

Ten years ago the New Writing Viewpoints series came into being. It took the liveliness and bravery of Multilingual Matters, reflecting the characters of Mike and Marjukka Grover, the insight of Commissioning Editor Anna Roderick, and the forward thinking of Tommi Grover to imagine that supporting such a thing had some potential, possibly even enough of that potential to create longevity.

Edited by Anna Leahy, Power and Identity in the Creative Writing Classroom (2005) was published to strong interest – not least because Anna was able to communicate the uniqueness of her book to her colleagues in the USA and because the creative writing academic community was looking for works that explored issues in the teaching and learning of creative writing and not finding much that delved very deeply. Certainly there were personal stories of workshops and worshopping, and “how to” books about writing fiction or poetry or screenplays, and works about how to write well, and books from Rhetoric and Composition specialists that touched on creativity, and handbooks and guides for students, but there was a limited number of books by creative writers and creative writing teachers that took a topic in the investigation of creative writing, in the teaching and learning of creative writing, and delved into that topic with a thoroughness that suggested there was empirical research, practical understanding and theoretical consideration being applied, as well as an awareness that there was more to discover, that there was even more to investigate.

Anna’s book did that. Others have done so too. Whether considering teaching techniques or research discoveries in creative writing, the books in the New Writing Viewpoints series are written and edited by experts from around the world, creative writers, teachers and researchers of creative writing, a community of practitioners and scholars that grows each year, and with each new book contributes to discussion of a human practice – that is, a discussion of creative writing – bringing new insights, new knowledge, new avenues for further thought and exploration.

New Writing Viewpoints reaches its ten year point with a sense that the curiosity that drove the founding the series, the courage and forward thinking of the publisher that made it happen, and the possibility and opportunity that always arrives with ten, is now truly blossoming.

In the next few months we will see the publication of Towards a Poetics of Creative Writing by Dominique Hecq, as well as Creative Writing and Education, an edited collection featuring contributors from around the world, in which I’ve had the pleasure of playing an editing role, and Creative Composition: Inspiration and Techniques for Writing Instruction, edited by Danita Berg and Lori A. May.

What Dominique and the contributors to Danita and Lori’s book and to Creative Writing and Education have in common is their commitment to advancing this exciting field of creative and critical practice. What they have in common too is that they will benefit from the support of Tommi and Anna, of Elinor, Sarah, Laura, Kim and others at Multilingual Matters in approaching the practice and analysis of creative writing, its teaching and its researching, with openness, enthusiasm and astuteness. Needless to say, I suspect ten would be very impressed!

For more information about the series please see our website. We are offering a special 50% discount on all books in the series until the end of the year. To obtain the discount just use the code NWV2015 at the checkout.