This week we published Diane Nagatomo’s latest book Identity, Gender and Teaching English in Japan. In this post, Diane explains the issues faced by Western English teachers in Japan and how they form both their personal and professional identities. 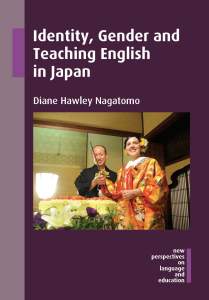 In a nutshell, my research interests generally lie in trying to find out what makes EFL teachers tick. In other words, what makes them do the things that they do in the classroom and their beliefs on how they should go about doing them.

For Identity, Gender and Teaching English in Japan, I focused on the personal and professional identity development of one group of language teachers: foreign women who are married to Japanese men. The ten women portrayed in this book range in age from their mid-twenties to their mid-sixties, and they teach in formal and in informal educational contexts. As wives and mothers of Japanese citizens, they have established deep roots in their local communities throughout Japan. And yet, as non-Japanese, they are not entirely insiders either. In addition, expectations that they should conform to Japanese gendered norms that place priority on the home and the family have shaped nearly every aspect of their lives. Nonetheless, all of the women in my study have demonstrated extraordinary resourcefulness, resilience and resistance in constructing their English language teaching careers.

My goal in writing this book was to let the women tell their own stories: how they operate English conversation school businesses; how they juggle numerous classes in multiple teaching contexts; and how they assimilate into their workplaces as full-time teachers. But I first wanted to situate their stories within the broader sociopolitical context of Japan in the introductory chapters.

So in Chapter 2, I discussed the historical background of language teaching and language learning in some detail, starting with the appearance of the first Europeans in the 1600s and moving to the economic miracle of the 1980s. In Chapter 3, I described the different educational contexts (conversation schools, secondary schools and tertiary institutions) that foreigners generally work in, and I discussed how ideologies toward the teaching and the learning of English in Japan have shaped, and continue to shape the careers of foreign and Japanese teachers. In Chapter 4, I looked at interracial relationships from a historical perspective and from a current one. Attitudes that consider Western men to be ideal romantic partners for Japanese women, but on the other hand, do not consider Japanese men to be ideal romantic partners for Western women, have influenced the experiences of all Westerners with Japanese spouses. In addition, I write about how these gendered attitudes have carried over into the classroom and how they shape the learning experiences of the students as well as those of the teachers.

The stories that are told by my participants in this book are uniquely their own. However, as a foreign woman with a Japanese spouse who has been teaching in Japan since 1979, they strongly resonated with me, and I believe that they will resonate with other expatriate teachers, male and female, who teach English abroad as long-term and/or permanent migrants as well.

For more information please see our website or contact Diane at the address above. You may also be interested in Diane’s previous book Exploring Japanese University English Teachers’ Professional Identity.