We recently published Making Signs, Translanguaging Ethnographies edited by Ari Sherris and Elisabetta Adami. In this post the editors introduce us to the book and its unique Bricolage and Talmudic sections. 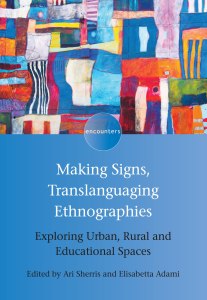 Preparing this volume has been a work of encounters which gave way to layers of experiences and we hope is just one possible opening to a new way of thinking about how we make and interpret meaning. It started as a serendipitous encounter between the two of us, when we met once at a symposium on translanguaging and ethnography and later began conversations on the possibilities of crossing perspectives, in an attempt at starting a dialogue between social semiotics and complexity theory. The experiences of the volume’s contributors form additional layers at the core of this volume from ethnographic/documentary linguistics, sociolinguistics, linguistic landscape, and multimodality (broadly conceived). The volume is also a site of encounters among four theorists of what we envisage as among the most innovative and promising perspectives on research and activism across inclusive approaches to communication, language and education with a Bricolage piece asking Jan Blommaert, Ofelia García, Gunther Kress and Diane Larsen-Freeman to answer ten key questions and trace interrelations with each other’s viewpoints.

Besides the eye-opening preface by Jeff Bezemer and Gunther Kress, and the introduction written by us, the volume hosts seven chapters presenting empirical studies that relocate margins at the centre, through investigations of phenomena and settings that have been little explored so far, and by attempting various entanglements between approaches that have rarely been combined. Research of and through these uncharted entanglements allows the authors (and hopefully the readers) to show how observing and documenting domains of communication that are often neglected can not only problematize traditional ways of knowing, but also shed new light onto social interaction, meaning-making and human communication as a whole.

Finally, the volume attempts at stretching the boundaries of (the often too limiting) academic genres. It does so first and foremost in the Bricolage; the process of its making has been a wonderfully enriching enterprise, for us, the editors, and (we like to believe) for the four theorists too, who had never met on (screen and) paper before. Working with them at the Bricolage, we have not only had further proof of the immense intellectual value of Diane, Gunther, Jan and Ofelia, but also experienced the immensely humane, thoughtful and caring characters of the four. We hope that the Bricolage may be the first of a series opening a new genre enabling academic dialogue through joint forms of writing. A second genre innovation is in the final chapter of the book, in which we draw from the Talmudic tradition to construct commentaries to each of the empirical chapters that add additional layers, imagined next steps in meaning-making and interpretation. The commentaries ask themselves how these studies would be reframed and (re)investigated further by adopting a social semiotic and a complexity theory perspective. This, too, is an attempt to start a dialogue between two approaches that have good grounds for potential mutual integration and yet had not met until now. We hope this dialogue will continue further with those who read the book. We look forward to hearing from you!

If you found this interesting, you might also like Engaging Superdiversity edited by Karel Arnaut, Martha Sif Karrebæk, Massimiliano Spotti and Jan Blommaert.

This month we published Engaging Superdiversity edited by Karel Arnaut, Martha Sif Karrebæk, Massimiliano Spotti and Jan Blommaert. In this post, Jan explains more about the background to the book. 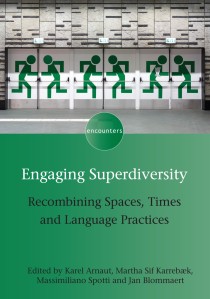 As all of us know, there is a tremendous pressure in the academic system at present to operate as an individual in a competitive ‘market’ of science focused on deliverables – or more precisely, a market of money for science and other more symbolic and status-related perks. All of these elements – individualism, competition and result-driven orientation – are fundamentally unscientific, and render our lives as science workers increasingly less interesting. Science is a collective endeavor characterised by solidarity and focused on processes of knowledge construction. Why else do we need references at the end of our publications, than to illustrate how we have learned from others in a perpetual process of critical and productive dialogue?

This critical reflex was the motive, almost a decade ago, for a small team of scholars to join forces in a consortium called InCoLaS (International Consortium on Language and Superdiversity) – a ‘dream team’ of people who decided to care and share, to explore domains only superficially touched by inquiry, mobilising each other’s resources in the process,  and to do all this without a pre-set target or road map. After all, exploration is not the same as driving in a limo on a highway with the GPS on: by definition, you don’t know where it will take you. There is no ‘draft proposal’; there are ideas.

This mode of collaboration turned out to be immensely ‘profitable’, to use the terms of the market. Several high-profile publications emerged, and our buzzword ‘superdiversity’ has become a modest celebrity in its own right, attracting what must be seen as the ultimate intellectual compliment: controversy. There are ‘believers’ and ‘non-believers’, and both camps have had, over the past years, sometimes heated debates over the value of the word ‘superdiversity’.

We ourselves don’t really care about that word. Sometimes one needs a new word simply to examine the validity of the older ones – the word is then just a sort of stimulus to shed some of the attributes and frames inscribed in the older ones; and it is not the word that is central, but the ideas it points to and the data it can help explain. Whether research is convincing or not rarely depends on which words are used to write it down; usually it depends on the quality of analysis and argument.

Engaging Superdiversity offers another set of studies on language and superdiversity, drawn from one of the key features of our collective mode of work: team workshops in which we listen to and discuss the work of our team members – senior as well as more junior researchers – and insert their results in the collective explorative process described earlier. In these workshops, all of us are ‘free’ – free to come up with unfinished ideas, unsolved problems, struggles with complex data. The joint work of critical dialogue, usually, results in products that are, to say the least, engaging.

This collection of essays, more than any other publication so far, gives people a sense of the ambience in InCoLaS activities. It covers the terrains we find important – inequality, the online-offline nexus, power – and expands the theoretical and methodological framing of the process of exploration. There is a very large number of new things in this book (for the benefit of the “non-believers” who question what is so new about superdiversity), and some of the chapters will, I believe, have considerable impact in the field.

I joined the editorial team rather late in the game, and my gaze is thus, perhaps, a bit more that of a detached spectator than Karel’s, Martha’s and Max’s. So let me say this: When reviewing manuscripts for journals, book proposals, or even student’s essays, I always make a distinction between work that is good and work that is interesting. Most work I see is good, in the sense that there is nothing wrong with it, other than that I would never read it: it’s not interesting. Engaging Superdiversity is good and interesting – extraordinarily so – and I am proud to see it in print.