This month we are publishing Essays on Conference Interpreting by James Nolan. In this post the author explains the role of interpreting in difficult international negotiations.

Negotiating difficulty stems from adversarial positions between two countries or from distances between them in the global geopolitical arena that make it hard to bridge the communication gap.

Countries may form coalitions based on similar interests, shared cultural and linguistic origins, similar circumstances, shared perspectives on common problems, or strategic alliances. Even on vital national security interests and problems as daunting as global climate change or pandemics, consensus positions are often possible and compromise solutions often temper sovereignty. The contents of public statements made in debate at global conferences cut across cultural, political, geographic and linguistic lines, and deliberations focused on existential threats, such as climate change, have revealed a vast area of common ground which, by its urgency, eclipses many individual differences in national negotiating postures, as failure to address such threats could imply futility for all other issues and efforts.

The interpreter’s role differs significantly when interpreting in a bilingual setting, be it in a bilateral encounter or legal dispute, or when interpreting into two target languages. In a one-on-one conversation the parties may be sharing the same stage but pursuing divergent aims that shape the public postures they adopt and their expectations of how interpreters should perform. The interpreter is occupationally vulnerable to counter-pressures from his two clients. No matter what he does, one party is apt to be displeased. Accordingly, in many bilateral encounters each party provides its own interpreter, placing each interpreter in a less ambivalent position and reducing role strain.

Identifying with the Principal

When making a speech or argument to an international audience, speakers customarily address the chairperson or presiding officer of the conference, invoking general principles that set the scene and strengthen the argument, and the speech generally embodies a point of view that is in some measure regional or global. For the interpreter, giving a convincing rendition of this type of speech means adopting an impartial attitude while also knowing how to identify with the principal sufficiently to make the interpretation performance effective in terms of advocacy.

If you found this interesting, you might also like English for Diplomatic Purposes edited by Patricia Friedrich.

This week we published Patricia Friedrich’s new book English for Diplomatic Purposes which is the first of its kind to examine the use of English in diplomacy, combining theory and practice to offer a ground-breaking volume for all those working in this field. 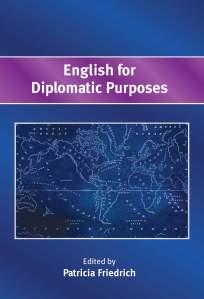 Can English be used for good? This question is at the center of my academic practice and was also the driving force behind the invitations I made to colleagues around the world, asking them if they would like to contribute to this book we created, English for Diplomatic Purposes. The fact that these nine researchers/practitioners and I embarked on this creative journey means that we believe it can.

English is often linked to a dramatic colonial past, and to both imperialism and the demise of minority languages at present. While these dynamics cannot be ignored, there is another side to English: that of an important lingua franca, one that brings people together, but that also changes wherever it goes, given local cultures and needs.

This is the backdrop to the book we wrote. How do we reconcile these paradoxical aspects of English and emphasize the uplifting, empowering and life-affirming purposes of the language? First of all, we teach it from an inclusive, summative perspective, and not from a deficit one. This means adding to the students’ repertoire of languages, reaffirming that the languages and varieties that they already speak are valid, functional and representative of their identities and cultures. It also means communicating to native speakers that English is manifested in many different forms. That speaking a variety other than the standard, in contexts where those varieties are called for, is actually a sign of understanding of audience, and that given such fertile variation, linguistic meaning needs to be negotiated in context.

That brings us to the very topic of the book – negotiation and English in diplomatic contexts. While we were familiar with many great pedagogical works that focused on business communication, we believe that the specifics of diplomatic communication called for special pedagogical tools as well. Noticing that those were hard to come by, we decided to start the conversation by writing chapters ourselves. Diplomatic negotiation, dialogue and agreement are special because they go much beyond deal-making, trade exchanges and business alliances. While diplomatic communication is not always synonymous with peace-seeking, we would like to see that facet of diplomacy as the ultimate goal of these exchanges. This applies to the big picture – countries, regions, economic blocks – but also, to a surprising degree, to our own individual lives.

The contributors and I invite you take this journey into the English language’s potential to bring people together in diplomatic conversation and to add your own ideas to the conversation.

For further information about the book, please see our website.