This month we published Relanguaging Language from a South African Township School by Lara-Stephanie Krause. In this post the author explains the term ‘relanguaging’. 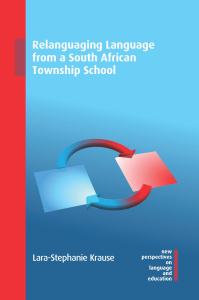 This book documents a thought experiment. It emerged from a long-term linguistic ethnography with a focus on English classrooms at a primary school in Khayelitsha, a township in Cape Town, South Africa. The thought experiment results in an attempt at a new conceptualisation of language classrooms – and, by extension, of language practices more generally. My methodological approach is unconventional and risky. Being at the school and engaging with the situated linguistic data in detail gave me the sense of overlooking something when applying existing theories of classroom language practices (like code-switching or translanguaging) to the data. This researcher’s intuition pushed me to reconsider existing analytical lenses. My hypothesis became that the phenomenon I observed could indeed not be described via the repertoire of existing theories. I pursue this hypothesis throughout the book and it drives me to develop a fresh analytical lens at the intersection of linguistics, applied linguistics and sociolinguistics. Relanguaging is what becomes visible once this lens is consistently applied.

Relanguaging therefore conceptualises language teaching not as a progression from a fixed L1 to a fixed L2 but as a circular sorting process constantly sorting out and bringing together again fluid, heterogeneous classroom languaging and Standard English.

Another notable difference between translanguaging and relanguaging is that the latter can make linguistic sorting practices visible. In translanguaging research, the idea of sorting also exists: People are said to sort through their individual repertoires made up of heterogeneous resources (rather than out of separate languages), choosing to actualize the resources most suitable for the interaction at hand. However, the sorting process itself is inaccessible to (socio)linguistic analysis. It remains ‘hidden’ in each individual’s head. By spatializing languaging – relying on the concept of spatial rather individual repertoires – relanguaging brings this sorting practice into the open and makes it accessible to (socio)linguistic analysis.

If you found this interesting, you might also like Assessing Academic Literacy in a Multilingual Society edited by Albert Weideman, John Read and Theo du Plessis.