In December we published Refugee Resettlement in the United States edited by Emily M. Feuerherm and Vaidehi Ramanathan. In this post, Emily introduces the main themes of the book and examines the discourse of refugee resettlement in the US.

The plight of refugees and asylum seekers has been making headlines for the past couple of years. In the summer of 2014, the unprecedented number of unaccompanied Central American minors crossing the Southern US border reignited the moral panic about ‘illegal’ immigration and the validity of asylum cases. In 2015, images and stories of Syrian refugees fleeing a violent war in their home country was juxtaposed against receiving countries’ attitudes towards this vulnerable, displaced population. 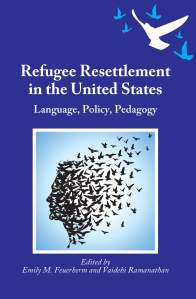 The US is geographically removed from many of the effects of the wars in the Middle East, and so has seen fewer refugees and asylum seekers from this region than Europe has over the past year. Nevertheless, the recent terrorist attacks in Paris pushed US politicians and policy makers to redouble their concern over borders and migrants, particularly focusing on refugees and asylum seekers from Syria, Yemen and other Middle Eastern countries. Now, politicians are calling for a ban (or at least more stringent background checks) on refugees being accepted from the Middle East, while at the same time there is a surge in raids identifying and deporting Central Americans seeking asylum in the US.

With all of these discourses around refugee resettlement, this volume uncovers and critically analyzes the language, policies and pedagogies that contextualize refugees’ experiences in the US. The volume brings together researchers from several fields within the social and educational sciences with original research on the state of refugees in the US. Although several of the chapters are situated in specific geographical locations, their insights elucidate the contested nature of the language, policies, and pedagogies that position refugees and asylum seekers within (and outside of) our society.

The language around refugeehood is explored in several contexts in this volume: the use of refugee, alien and immigrant in US media compared to the Immigration and Nationality Act (chapter 2); the various ways that the word refugee is appropriated or rejected by populations to which it is ascribed (chapter 3); and the discursive construction of refugees used by organizations responsible for their resettlement (chapter 9). Educational policies are also discussed at many scales: national and state educational policies directed specifically to refugees (chapter 4); higher education policies meant to support refugee background students (chapter 7); and local classroom policies in an elementary school English Language Development class (chapter 8). The chapters on pedagogies of teaching refugee adults highlights the need for building upon refugees’ strengths at the programmatic (chapter 5) and individual levels (chapter 10), as well as critically examining refugees’ “need” for English (chapter 6).

You can find more information about the book on our website. You might also be interested in Vaidehi’s other books on refugees: Language Policies and (Dis)Citizenship and Language, Immigration and Naturalization.

This year Heriot-Watt University in Edinburgh was host to the annual British Association of Applied Linguistics (BAAL) Conference so I headed north to run our stand and enjoy a few days in Scotland.

We’ve had a busy summer and published quite a number of books in the past few months so this was reflected at the conference: delegates streamed to our stand to browse the new publications which were making their first conference appearance – among the popular books were Blommaert’s Ethnography, Superdiversity and Linguistic Landscapes and Ramanathan’s Language Policies and (Dis)Citizenship.

The welcome reception on the first evening was doubly exciting.  Not only was there a string quartet and whisky tasting for the delegates to enjoy, but also the announcement of the BAAL Book Prize 2013.  We were delighted for our author Alastair Pennycook, as his book Language and Mobility is the joint winner of this year’s award.  Sadly Alastair wasn’t present to celebrate his achievement, but I was delighted to accept the cheque and toast his success with some raspberry gin in his place!

Apart from the conference I had fun exploring Edinburgh in the evenings.  The centre and castle were beautiful in the end of summer dusky light and I made a special trip to the Elephant Café where JK Rowling spent a lot of time when she was writing the first Harry Potter book.  To see the full selection of my photos from the trip please visit our Facebook page here.

Earlier this month we published Language Policies and (Dis)Citizenship edited by Vaidehi Ramanathan. Here Vaidehi tells us a bit more about the book and how she came to write it. 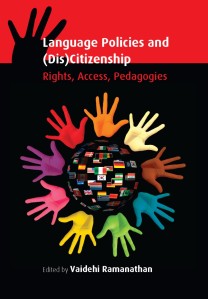 The primary impetus for this edited volume is my growing dissatisfaction with the ways in which the term ‘citizenship’ is being conceptualized and used both by the media and by scholars in the discipline. It seems to me that much discussion ends up in debates about ‘border controls,’ ‘citizenship tests,’ and ‘tighter immigration checks.’ Visas, passports, and securing territories undergird these arguments, and while these are important, missing from the deliberations is the idea that perhaps concerns around refugee resettlements or (illegal) immigration cannot be the object of purely juridical treatment (at legislative or regulatory levels). Perhaps we need to shift our foci to where we begin openly engaging with what is at stake in the articulations and tensions around terms such as ‘citizens’ and ‘citizenship,’ issues that can emerge only through grounded explorations. Certainly, the various essays in this volume prompt us into doing exactly this. Focusing on the backstory behind ‘citizenship’ allows us to zoom in on what citizenship permits, namely access to fuller participation. It also allows us to address (dis)citizenship and local contexts where fuller participation does not happen. This term—(dis)citizenship—is one used by Pothier and Devlin (2006) in their work on disability rights and policies, and while I have drawn on it in my research on disabilities, I find that it fits well in my current thinking about language policies and citizenship. It permits one to ask: What contexts of (dis)citizenship are we blind to? What roles do language policies and pedagogies play?

Because the focus of the volume is on ‘(dis)citizening,’ I wanted it comprised of authors who have known what it is like to not be able to participate fully. Toward this end it seemed fitting to have the contributors be primarily women (there is one male co-author) since women the world over have a historicized understanding of what it is like to not have access to full participation. Furthermore, I was trying to bring several different research domains together to address (dis)citizenship, including scholarship on pedagogies and language policies, and I found as I was making my list of possible contributors that female applied linguists have done some of the best work. (I was surprised to find that we don’t have more volumes made up only of women authors!)

Regarding each of the essays: ‘(Dis)citizening,’ flows thickly as a subtext through each piece. Every essay articulates nuanced language-related political and historical concerns. Each one, in a very different way, addresses larger political questions around modernizing, late modernity, or postcolonial concerns. The authors situate their scholarship in diverse parts of our planet (Zimbabwe, Australia, the UK, and the US, among others) and offer situated accounts about very local contexts (courtrooms, refugee centers, classrooms, teacher-education contexts, heritage centers) that point to the inter-relationality between languages, policies, pedagogies and citizenship. The volume consists of two sections, with the first one addressing issues of challenging and transforming discourses about citizenship (with chapters by Makoni, Matsuda and Chatwara, Feuerherm, Menard-Warwick, Punti and King and McCarty) and the second addressing issues of education, learning and citizenship (with essays by Sagoo, Widin and Yasukawa, Loring, Menken and Henze and Coelho).

This volume is intended to make us see that democracies historically built up through structural inequalities are not abstract categories but ones built up through particular historical processes encased in regimes of power (whether that is power associated with countries, institutions, languages, or pedagogic practices). Citizenship, as we argue, has as much to do with enacting civic citizenship and being active citizens so as to create contexts of fuller participation, as it does with legalities around visas and passports.

For more information on this book please see our website.