Editors of our recent book Rethinking Language and Culture in Japanese Education, Shinji Sato and Neriko Musha Doerr, describe how they came to put together this volume and why the topic is important. 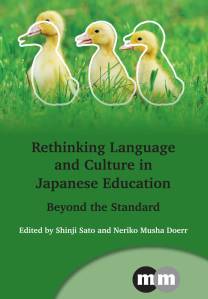 The current educational climate is dictated by standards and tests. The standardized tests to measure individual aptitude and, collectively, the success of an education system and even the well-being of a nation as a whole. Knowledge is treated as static, commodified and homogenized. In this volume, we ask: What are the effects of this climate of standard tests? What kinds of schools, teachers and students does it reward, and what kind of learning does it encourage? What kind of knowledge does it promote, how does it do so and to what effect? What can educators and researchers do to challenge this climate? This volume seeks to answer these questions by investigating the dynamics of power relations in the processes of the standardization of language and culture and by exploring researchers’ and educators’ roles with a focus on the case of Japan. Japan’s language and culture have undergone such extensive standardization that various popular and academic discourses regard them as homogeneous. This makes Japan an important case for a study on the processes and effects of standardization.

This volume emerged from the editors’ personal and academic engagement with the process of standardization. As a Japanese language educator whose field is educational anthropology, Sato constantly faces the challenge of how to engage with the standard language and variations. He always wonders if he should include variations in the classroom or just focus on the standard language. If he decides to include variations, which variation to include?  When a student uses a variation, should he accept it or correct it as a ‘mistake’?  How to treat the language that some people are actually using as a mistake? Sato asks himself these questions when he teaches Japanese everyday.

As a cultural anthropologist interested in power relations manifested in uses of language as well as discourses around them, Doerr is concerned with how individuals come to desire the standard and various ideologies, concepts, and daily technologies that usher them to do so. Developed from a session on language standardization Doerr organized at the annual meeting of the American Anthropological Association in 2005, this volume focuses in particular on the standardization of language and culture in Japanese education.

This collection investigates the ways in which ‘language’ and ‘culture’ come to be standardized through various ideologies, representations in textbooks, and in classroom practices. In doing so, the book provides insights into the standardization processes that connect theoretical and practical concerns that researchers and educators may have. The studies on language learning are mainly focused either on acquisition of language/culture (micro-level studies) or on the relationship between languages and cultures (macro-level studies). This book extends to both the micro and macro levels, and to Japanese language education designed for both ‘native’ and ‘non-native’ speakers. By analysing the process of language/culture standardization, this book offers new ideas and awareness to the field of language studies and education.

The cases that this book illustrates cover a wide range of Japanese language/culture standardization processes in numerous contexts: practices of translation during Meiji era Japan, ideologies of standardization of regional dialects throughout the recent history in Japan, practices in college Japanese-as-a-Foreign-Language classroom in the United States, discourses in journals of Japanese language education, and classroom practices in nursery and primary schools in Japan. Few such studies have been published in English, making our contribution all the more important. The viewpoint this volume suggests is useful not only for those involved in teaching Japanese language and culture in and outside Japan as well as in between such borders (i.e. heritage language education), but also for those who are interested in the processes of differentiation, hierarchization, politics of education, multicultural education, bilingual education and globalization as it relates to education.